The Erasmus student is a dying breed, and as one of the last years of Goldsmiths exports (NB: they’ve pledged to continue the scheme for the next two years) I shall hereby present to you an account of the first month of life in Vienna which has taken form in roughly 5 non-chronological chapters:

Upon receiving confirmation last August that I would be studying in Vienna for my second semester I swiftly downloaded Duolingo and smugly assumed that I was already part-way to learning fluent German. A few weeks of sporadic testing and I could confidently declare that ‘the beetles drink milk’ which made me strongly evaluate the relevance of vocabulary available on Duolingo and so I consequently stopped trying entirely. As a result I now have a purely beetle-based understanding of the German language and am thus finding it somewhat troublesome navigating social situations. Despite being anxious to avoid the stereotype of the Brit abroad as overly reliant on the assumption their host will speak English, I have in no way deviated from this stereotype, thus finding myself in a constant state of self-deprecation, idealistically guessing my way through the entire language with my knowledge of English, Swedish and smiles (the universal tongue).
2           2)      Transition
Comparatively, rent in Vienna is an absolute pinch and close to half of what I had been paying in Deptford so I really shouldn’t be complaining. Unfortunately this has come at the cost of my beloved student-living disarray that seemingly does not extend to Austrian student digs owing to a non-exhaustive list of house rules that I am penalised for failing to abide by.
If I were to describe the lavish architecture of Vienna to a South East Londonder I would liken it to Deptford Town Hall x100. It’s objectively jaw-dropping and a perpetual delight. From the University building itself to parliament, the museum quarter, grandiose theatres and opera houses, strolling around the city is a constant thrill. For those who feel culturally unfulfilled in spite of the intimidating rich cultural backdrop of Vienna, there is an opera themed public toilet in Karlsplatz station that charges you 50 cent to piss to Strauss; an exercise easily achieved in the comfort of your own home for the price of a Spotify premium account.

3           3)      Nose-diving into a life of meat- my passionate affair with a Käsekrainer
Away from the judgements of South-East vegans, I have developed a deeply spiritual connection with the Austrian witching-hour delicacy known as the Käsekrainer or ‘Carniolan sausage’ over the course of this month. For those of you who are unfamiliar with this work of Austro-Hungarian genius, the Carniolan sausage is a dish of true perfection; a pork (?) sausage internally laced with hot cheese between a waistcoat of baguette. But beware: this ambrosial masterpiece is served with a side order of risk, as the visitor’s guide to Vienna advises; ‘if you’re not careful, a sufficiently-distressed Käsekrainer can propel hot fat huge distances, necessitating the wearing of protective goggles.’[1]. For those of you hankering for a sample, there are various restaurants around London that serve the dish, though in much more formal setting. This is a dish best served Wasted.
Asides from national specialities, the discovery of the pay-as-you-wish restaurant Der Wiener Deewan has entrenched meat-eating habits with a delicious selection of all-you-can-eat set curries for whatever price you feel is most fair. This frankly blew the collective minds of me and my culinary companion, opting for a medium sized mains portion and dessert for €6.50 each. My newfound meat-based lifestyle is delicious and I am never turning back.

4          4)      Rebirth/ Running around/Foreign territory
As a response to chapter 3 and with all this abundant spare time that I used to fill with socialising and evenings at the Marquis of Granby I decided to invest my time and physical energy in the preconception of the Erasmus student as self-interested. The transition to healthy-Goth (a reworking of the notion of Health Goth with a diminished emphasis on the aesthetic) has been a tale of two halves; thwarted somewhat by the devilish presence of cheap European cigarettes and bottles of Prosecco at €3 a pop. In the first week I donned my optimistic gym wear and triumphantly announced to my new housemates I was going on a run in a (rehearsed) nonchalant tone, hereby marking my new persona as part-time runner. Leaving the flat I found myself blindly ‘running’ around the local neighbourhood block-by-block, polishing off this athletic venture with a stroll around the local Austrian equivalent of Waitrose, and window shopping for food in sports-gear. I cheerfully imagined the telephone conversations of my flatmates, ‘Our new flatmate’s great, she’s only been here two days and she’s always out running!’. Such painfully unsustainable lies.
5         5)      Brexit Repentance (BrePentance?)
The legacy of June 23rd is still hot on the tongues of many Austrians when you confess British nationality. Furthermore, having opted for more Cultural Theory based modules at the University of Vienna I am given daily reminders of the brutal history of British colonial imperialism and am plagued by a cloud of generally perpetual guilt. All in all, it’s not a great time to be a Brit abroad and as a some-time bar-dwelling exchange student, you’ll constantly find yourself haplessly apologising on behalf of your country’s idiocy. I’ve taken to wearing my ‘Don’t blame me I voted Remain’ badge regularly to avoid confusion.
I recently attended an event hosted by the university welcoming incoming exchange students that fell on the day that the UK formally began the process of leaving the EU. Speaker Heinz Fassmann (Vice-Rector of International Affairs) asked for a show of hands of UK students and later approached me after the speeches (regrettably directly after I had launched myself at the most handsome buffet I have ever witnessed) asking me- essentially on behalf of all Erasmus departments in the UK, what was going to happen to the scheme moving forward, as 50% of students of the University of Vienna seek an exchange to the UK. What then ensued was a furious rant delivered between mouthfuls of smoked salmon and red wine about the monumental confusion of Brexit and lack of understanding surrounding EU-funded schemes and free movement going forward.  The lethal mixture of Brexit-talk and a free bar left me thoroughly red in the face.

This has been life thus far; a whirlwind few weeks of flustering around in a holiday-mode daze that I’m reluctantly emerging from. Am I integrating? Maybe. I’ve invested in some red slippers emblazoned with ‘Austria: Vienna’ in white stitching so I guess I am part there. Unfortunately I didn’t inspect said slippers thoroughly enough and it turned out that I’d purchased two left shoes. Hopefully this isn’t some horrible metaphor for bumbling through life. 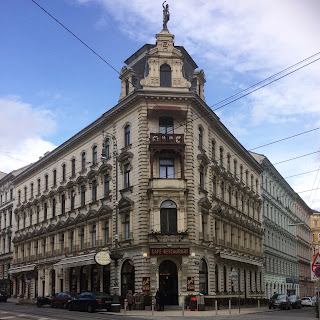 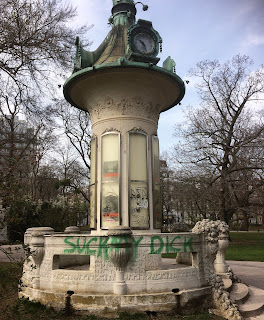 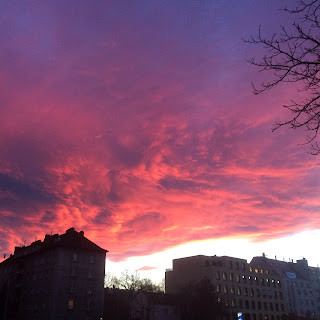 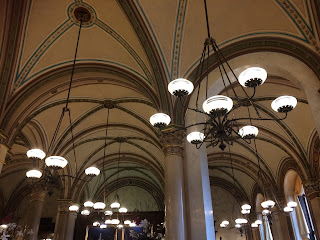 Words by Ellie Potts.
Written for publication in [smiths] magazine, all rights reserved.
[1] http://www.visitingvienna.com/eatingdrinking/food/kasekrainer/
Posted by Unknown at 11:10 No comments: