Review: Voices from the Deep, Paperclip Theatre for AYT

Staged as part of the King’s Head Theatre’s Who Runs the World? season championing female playwrights, Voices from the Deep has the misfortune of landing on the hottest bank holiday Monday since records began. Despite the sweltering climate, Paperclip Theatre’s all female cast captivatingly channel the voices of women from male-penned history books both “distinguished” and “downtrodden”.
The play is comprised is of a series of nine short stories, the first of these being a fictional encounter between the redheaded cousins, Queen Elizabeth I and Mary Queen of Scots. Elizabeth enters as the young princess, cherry-picking Shakespearean phrases and confessing her vulnerability as a young woman in a patriarchal state. “Shall I compare thee to thy sister?” asks Mary, to which Elizabeth concludes that, “Comparisons are odious… they fuck you up”. There is an interesting blending of stern political critique with queer aesthetics and comedy, as Mary laments the historic erasure of women from the literary canon one minute, with a Drag Race interlude the next minute as the cousins bust-out a lip sync battle to Garbage’s ‘Stupid Girl’. “Do you think you’re non-binary?” Mary asks the Virgin Queen, to which she responds, “I think it’s hard to say but I’m sure I’d have related to the concept”, and later “I think I might have been the first drag queen in history.” Whilst it is fundamentally important that queer narratives are afforded better, more diverse representation, one does wonder whether there is any significance in reading these historical figures with such a lens, and to what purpose?
The narrative follows a loose historically chronological tour which carries the play through to colonised India and a sleazy British Imperial physician who takes advantage of older women in unhappy marriages, believing that “the cause of their heat’s a deep, deep longing for some proper meat”. Both doctor and the patient enact an outstandingly hilarious exchange with fiendishly funny comic-timing and diction.
The tone changes as we are introduced to the half-French half-Algerian neglected child of the Algerian Genocide, barricaded in her ancestral home. She performs a rousing monologue which makes for a heavy portrayal of lost innocence in sharp contrast to the previous episode. It’s sadly not helped by the cloying humidity of the evening, although it definitely contributes towards a certain ambience. We meet Christina Rosetti and Cleopatra in passing, as they interject between shorts. Their interventions feel somewhat clipped with scope for more complex character development.
The final instalment introduces us to two love-struck girls, reminiscent of Rosetti’s Goblin Market duo. The girls run from the encroaching forces of a Cockney heteronormative vicar-goddess before being eventually cornered and professing their love for each other. The vicar-goddess ultimately surrenders, rolls her eyes and barks to her PA “Jane babe, we need to diversify” in a thematically summative final line.
Whilst the play’s attempts to reinvigorate Shakespearean verse might not be to everyone’s tastes, there are moments of true comic pleasure between serious moments of political interrogation.
Voices from the Deep played at the King’s Head Theatre until 7 May
****************
This piece was written for A Younger Theatre, link available here: https://www.ayoungertheatre.com/review-voices-from-the-deep-paperclip-theatre/
Posted by Unknown at 09:13 No comments:

Review: Mood Music at the Old Vic for AYT

Propelled by the anxious collision of psychological expression and repression, Mood Music interrogates the boundaries of creative ownership and the extent to which we are emotionally invested in our artistic products. Written by Joe Penhall (Sunny Afternoon, Blue/Orange) and directed by Roger Michell, the piece chronicles the ego-clash of producer Bernard (Ben Chaplin) and wide-eyed vocalist and protégé, Cat (Seána Kerslake). After moving to London from her native Dublin, Cat is scouted by the esteemed producer who promises fanciful collaborations, avowing that he is “no stranger to excitement”. Dialogue splices between conversations with their respective doting psychotherapists (Jemma Redgrave and Pip Carter) on a stage decked with a low ceiling of vintage microphones.

The relationship between the two soon turns sour. Cat becomes increasingly demystified by the façade of musical success and pines for a ‘purer’ method of musical expression to spiritually reconnect with her deceased father. Studio quarrels are spurned by Bernard’s self-assured musical machismo and confident misogyny. The trope is all too familiar and he is superbly repugnant. The declaration by Bernard’s Lawyer (Neil Stuke) that “It’s time to change the balance of power… within reason” illustrates the extent to which misogyny is embedded in the operation of the music industry and manifests throughout the play’s legal struggles and the propagation of Bernard’s intuitive ‘genius’. “We’re essentially midwives, but the songs are our babies” he affirms. In this, and other references to songs as his “babies”, we see the heart of Bernard’s quest to erase female presence and stabilise his unstable identity. Chaplin’s performance garners audience chuckles, which I suppose is either rooted in his brashly exuding charm or their own reflective identification. I’m impressed, but as a young female creative I’m far from amused.

Ultimately Cat descends into substance dependency in the midst of legal toils as she struggles to rationalise her trauma. There are moments when the language feels cheap, underscoring the soulless performativity of the industry as Bernard philosophises “Sometimes the dark heart of a song can never be known because frankly it’s too squalid”. For a play centred on the production and performance of music, there is surprisingly little actual music, albeit a sorrowful string-ensemble conducted by Cat which concludes the evening and injects a grain of optimism to the story of female creative and legal oppression. Whilst it might be a bitter pill to swallow, Mood Music is a timely rumination on the purpose of psychotherapy under capitalism and its use in fostering creative production and profit at the expense of those too weak to speak out. 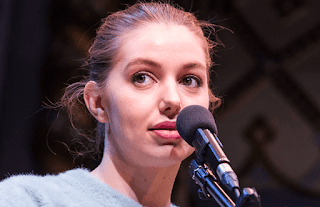 And What Are You Going To Do With Your English Degree?

I have taken up gardening. On the hottest day of the year, nine days before my dissertation is due in I wake up at 7am, don a pair of frayed daisy-dukes and promptly start weeding my patio. Our garden is parallel to a railway line populated by hip middle-class commuters, which means that amongst the weeds I find extraneous pitta breads and sachets of pickled ginger which look like little fermenting slugs. I also find four, thick, cream-coloured bones which I sincerely hope have been pilfered from the loots of neighbouring dogs and are not the crumbling remains of a missing person. Whilst dead-heading nasturtiums I think of my impending future and the crushing weight of existential dread rests on me like a sun hat.
The corners of my mind which aren’t perpetually imploding under the strain of my dissertation are consumed by thoughts of life post-graduation. Two months ago, I sent an innumerable tirade of emails to literary agencies and publishers in and around Greater London, requesting an interim placement. I have worked for the sum of two full months on unpaid work experiences throughout my time as an undergraduate student, performing tasks that have ranged from selecting novel submissions, to researching survivors of mass school shootings, to assembling a flatpack Argos bookcase and moderating Jacqueline Wilson’s email account. I attached copies of my CV to these emails, those finely-tuned hand-crafted emblems of my worth, honeyed with meticulously tailored covering letters for each prospective company. I received only two responses, one of which subsequently agreed to meet with me and offered me one month’s work, unpaid, for two days a week. I chased up the offer with a friendly email, seeking to confirm dates. I was more than a little surprised when they responded:
“We’ve been incredibly busy and we can no longer accommodate you…”
I took twenty two hours to formulate a response, ruminating over the time and money I had spent travelling to the offices, meeting with the company owner and firmly shaking their hand by way of cheery confirmation. After deliberating over the line “I feel like you’ve wasted both my time and money for the promise of unpaid work”, I decided to keep it in. Their response was wildly, blindingly ignorant to the difficulties of gaining any kind of work in the creative industries. It began, “Wow, Elinor!” dripping with the sneering condescension of a school teacher, reprimanding me for my churlish misdemeanours.
Sure, I am a privileged, cis, white, able-bodied female, so I may run the risk of sounding entitled when I whine. But when you’ve racked up months of ‘experience’ with nothing but notches on you CV, it would be nice to think that someday you won’t be continuously turned down for offers of your free labour. If this degree has given me anything it’s a bloody work ethic, persistence and half a stone in weight. As I retire from three years (£27,000+) at Goldsmiths, I implore those of you continuing your studies to know your worth. Don’t work for dickheads if you can at all help it, and for the love of God, be kind to your fellow human.
I’ll spend my summer broke and disillusioned, re-potting and scattering grass seed between crisp packets. Mother Nature won’t slap me on the wrist for speaking out of line. I will stay in my garden until I have lived off my loan whilst the city of London crumbles around me.

BLAST FROM THE PAST: Mac DeMarco 'Salad Days' Album Review 2014 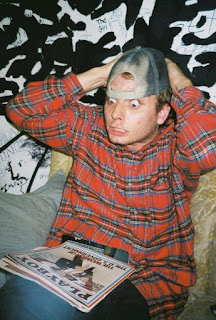 Here's one that slipped the net- an album review for the Exeter Daily published in 2014. Seeing as I'm using this space as an online portfolio I thought I may as well slide this one in. It's tremendously succinct for an album review, but I imagine that I spent a great deal of time tirelessly fretting over each individual word. Here's to writing more and getting ...slowly... better.

An effortlessly lazy third album from tousled Canadian blue-waver DeMarco, Salad Days sees a daydreaming melange of lulling guitars glazed with Sunday morning vocals delivered through a hungover smile.
Opening track ‘Salad Days’ is an upbeat lament similarly as ‘Let Her Go’ carries a sunshine feel despite lyrical sadness.
Lo-Fi and nonchalant, the record is brushed with psychedelic tones with ‘Brother’ and stand out track ‘Chamber of Reflection’ exercising this with much of a continuation of the sounds heard on 2012’s ‘2’.
Penultimate ‘Go Easy’ is synonymous with the record as a laid back, easy breezy summertime gem. 7/10


https://www.theexeterdaily.co.uk/news/entertainment-reviews/mac-demarco-salad-days-album-review
Posted by Unknown at 09:19 No comments: