Book Report: Marina Keegan's The Opposite of Loneliness

Published posthumously, Marina Keegan’s The Opposite of Loneliness is a stirring collection of reflective, lyrical essays and stories written during her final year of studying at Yale before her death at the age of 22. The title of the memoir is taken from an essay Marina had written for the graduation volume of the Yale Daily News in which Marina tragically assures her peers that ‘We’re so young. We’re so young. We’re twenty-two years old. We have so much time.’ The essay grapples with the intangibility of love and community, which she compares to, ‘When the check is paid and you stay at the table.’ It’s a manifesto for slowing down, knowing ones worth and valuing the present tense. The collection is also movingly prefaced by her English teacher, Anne Fadiman, who recounts an email she once received from the student; inspired by the excuses of Samuel Taylor Coleridge, in which Keegan wrote, ‘I’m so sorry about the delay in writing to you! The fact of the matter is I’ve taken ill after wearing excessively thing breeches in bad weather- not to mention because of my toothache, insomnia, gout, cough, boils, inflamed eyes, swollen testicles and raging epistolophobia.’ I howled with laughter when I first read this. This memoir has the unique power of transporting you through the full spectrum of emotions.
Keegan’s work is articulate and uniquely enchanting. In essays such as ‘Stability in Motion’ and ‘Against the Grain’ there is a distinctly literary depiction of scenes which might appear mundane on first glance. These are instead injected with the vitality of an excited young writer. Keegan uses her own vehicle as the site of her ‘Stability in Motion’. This car was inherited from her grandmother, and it carries her faithfully through her adolescence. It has a rich tapestry of former owners and is the location of countless coming-of-age scenes- from her first kiss, to attending drive-in cinemas, discovering mixtapes and eventually moving out of her childhood home. It becomes loaded with ‘tiny, tiny tinfoil balls’ and ‘an eclectic debris that dribbled gradually into every corner’ and the collection of random objects assembled in the backseat holds symbolic significance as a bricolage of her maturation. It’s sensually invigorating, confessional writing.
‘Against the Grain’ wittily interrogates Keegan’s fraught dietary history with gluten and her mother’s scholarly investigations into the science of gluten intolerance, leading her to undertake pioneering charity work within her local community. Keegan uses her dietary requirements as a springboard for exploring her relationship with her mother, charting the problem from her youth right up until she enrols at university. Keegan demonstrates an awareness of her perpetual proximity to illness and death and the piece is narratively rounded with a cyclical, considered ending that alludes to a desire to reproduce and replicate her mother’s maternal self-sacrifice.
‘Why We Care About Whales’ is an ode to beached whales, ‘Blue whales and fin whales and humpback, sperm, and orca whales: [for which] centrifugal forces don’t discriminate’. It’s curiously placed in the collection after ‘Against the Grain’, but underscores Keegan’s ability to write about anything and everything with searing compassion.
Keegan’s writing is quirky and polished, she is both self-deprecating and wise beyond her years. Tragic circumstances aside, this collection is a rousing picture of a sparky young writer on the precipice of greatness. 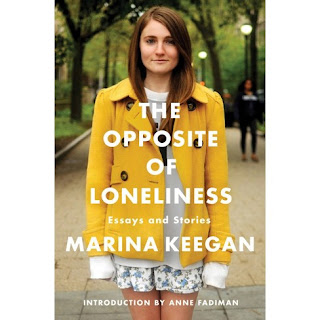