Becoming my own 14 year old icon: A revelation. or An Education in Blagging it.

I'd like to think I've done a lot since moving to London. I've served the president of China a fish course wearing shoes that my mum bought from Sainsburys in the 40% off TU sale. I've dug myself into an unimaginable pit of monetary debt, I own a basil plant now, I'm a vegetarian, I've developed an intolerance to whiskey. And, to go on, as of the previous night, I witnessed a collective of my 2009 indie icons snort cocaine from a Soho bar to the professionally glazed eyes of the staff. Is this truly the climax of my adulthood? Is this making it?
Tuesday afternoon, with less than 3 hours notice I made the impromptu decision to drag my miserable body to a ~hip #music gig, following a mutual friend pulling out last minute and as bid for myself to procrastinate further the impending 3 essays I have due in for the next few weeks. This is not a pastime I have participated actively in since I was about 14 and an acne ridden resident of Brighton with a paper round and an unquenchable desire to fit in. So I ambled to Brixton with 2 cans of K cider stuffed into my trouser band and some sleek white cotton trousers [I purchased myself for a meagre £3 from the M&S Bideford outlet] we flitted between support acts and labyrinth-style smoking decks till the headline act; my ethereal puberty pinups graced the stage and I felt a sweeping hormonal déjà-vu.
The group I had been with had all shared a similar musical/maturation experience fixated round this band and we stood in a small ring for the encore and held hands in a strangely ritualistic manner. G had a lot of feelings and had a spontaneous sob to one of the more down-tempo numbers.
The hilarity-cum-internal screaming did not unfold until the gig was over, following a hapless and cripplingly awkward scene of events with a corner shop owner, lemonade, my insufferable pedantry and an unforeseen sexual remark. I screamed in the gentleman's face, holding up a stern finger and sharply threw the can back on the shelf before marching off into the Brixton night in a trail of enraged feminist fury. As fate would have it, this would lead us to the local pub, an upmarket French establishment at around 11:45pm was unremarkably heaving and upon purchasing a more expensive and non-sexist lemonade, we found ourselves a tiny booth already occupied by three unassuming young men, one clutching a tote bag brimming with records, all sporting various degrees of facial hair.
Whilst drinking this delicious lemonade we mused over the night thus far, our past experiences of live music and where we would go on from this quaint French affair. The men next to us finished their drinks and we shuffled along to allow them to exit. They filed out until the first member of the troupe was out the door, when gentleman number three dashed back to our booth, leant over and into my ear he whispered: "the after party is one 100 Wardour Street, Soho". Our heavenly hairy godmother in a paisley shirt and an earring. It was henceforth that a 2009 Indie mirage unfolded into a miraculous overdraft fuelled blur of teen heroes and free Peroni.
Following an additional misogny fuelled encounter with my fantastically resilient companion (see mid image) and a bored Brixtonian we eventually wriggled into an uber; the tax-free/mass-corporation-guilt leaving a sour taste that was distinctly obscured by the circus of butterflies in my stomach.
Living in the South East of London, it's not all too often I head into the centre of town. When I do, mostly for work purposes, I am consistently cycnical and frequently glower to myself over:
When we got out of the uber in Soho, in a similar manner to my experience of offering canapé’s and serving plates to women legitimately wearing tiaras to show their wealth at the China State Banquet, I felt like a Soviet spy.
We slipped into the after party, guilt-free greeted by an entourage of 30-40 folk, huddled round a private table with waiters in grey suits and dull eyes who offered us vodka with cranberry/soda and called you ‘madam’ like a Victorian lady. In the smoking area we bumped into the men we had briefly met at the pub- it transpired they had names- Ollie Tao and Cozzie, who looked genuinely pleased to see us. We were without a doubt the only members without a direct link to the band, three thirsty and clueless young women following our noses to watch our teenage idols dissolve their septums.
I come back to the question, if my fourteen year old self could see me now would she be jumping for joy? Texting all her pals on her Nokia smart phone? I’m sorry to break the illusion Elinor but they’re really not all they’re cracked up to be, these are a gang of men in their early 30s, who probably have wives and a mortgage.
For those of you who are as ill-informed as I was, it turns out- what you do at after-parties is mingle and people ask you ‘what you do’ whilst they stare at your breasts for the response. Generally you repeat this about four times, mid-transition your previous converser will glare at your new chat mate and so the process continues.
To be brutally honest with you Martin, I still don’t really know what I’m doing, both here and in the grand scheme of my life, but once the housing bubble bursts I doubt you’ll know what you’re doing much anymore. 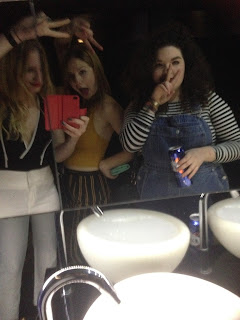