In their earlier days, the band showed a predilection for flagrant nudity and on-stage masturbation, with the New York Post claiming that the Peckham bevy once performed covered in faeces. Thankfully, they seem to have scrubbed up on basic hygiene and socially acceptable presentation as Saoudi enacted a pre-gig freshen-up, moodily airing his pits before 'Auto Neutron' kicked off the afternoon’s jaunt through the six-piece’s lip-curling repertoire, heavy wafts of post-punk mingling with the plumes of a punter’s cigar smoke (it was that kind of clientele). A deliriously full sound, Saoudi characteristically thrashed to the sound of a rogue tenor saxophone. After the afternoon’s anti-climax of indie darlings The Horrors [they turned up twenty minutes late, then proceeded to stubbornly perform only three songs for their main stage slot], it was heartening to be reintroduced to FWF's reinvigorated punk presence as they deservingly graced the main stage.

It's easy to spot the band's influences (The Violent Femmes, The Fall,) but they're keen to distance themselves from contemporaries such as Slaves or The Arctic Monkeys. 'Tinfoil Deathstar' follows, succeeded by 'I Am Mark E. Smith' and 'Heaven on Earth.' 'Cream of the Young' riles the onlookers into a sticky, brawling agglomeration of moshing bodies, the chorus nicely substituting as a chant since 'Football's coming home' was soured by Columbia's fancy footwork. 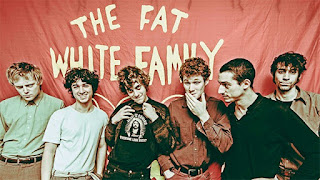 "We'd like to dedicate this song to the boys in the band!" Saoudi purrs, before launching into a fired-up rendition of 'Special Ape,' flexing the Cockney syllables as he asks nonsensically, satirically, "Why do you look at me up in lying on my bed on my right?", still bopping with a tinnie in-hand. ‘Whitest Boy on the Beach’ of Trainspotting T2 fame is next, incrementally punkier but undoubtedly pared back in light of their naked scandals and the regulations of being booked for a mid-afternoon main stage set on the Sabbath day in West London. The afternoon’s orderly anarchism comes to an end with ‘Touch the Leather,’ the final jewel in the sweaty, sticky crown.
Posted by Unknown at 05:02